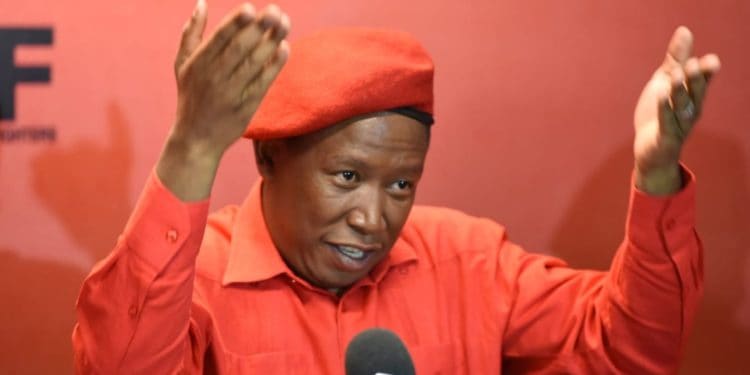 Julius Malema, leader of the Economic Freedom Fighters, was addressing gatherers at the Risko Fakude stadium in Embalehle Secunda at a June 16 Youth Day 40th Anniversary rally where he reiterated that Zimbabweans are wealthier than South Africans given that they own the land.

He went on to add that drought, famine, disease and economic ruin amounts to nothing compared to owning land, and this is what makes Zimbabweans enviable and expressed his support for Zimbabwean President Robert Mugabe and his land reform policies.

“It doesn’t matter that your children are dying of hunger and disease because at the end of the day you still have land,” he said and added that South Africans would be lining up to ask for jobs there because we cant create our own jobs.”

He went on to stress that, “Wealth is not what is in your bank account; being rich is to have the land. When you have land you can create jobs. You can even hire the children of white people.”

Malema also insists that the EFF are the only party with a “commitment to take back land and give it to people equitably,” a move is well known to Zimbabweans as the Land Reform Program.

“The EFF is not ashamed of, and will never retreat from, this commitment because buying illegally acquired property is a criminal offence, and we will never be a party to criminal activities,” he said.
The same Malema has earlier this month reaffirmed that the EFF would expropriate land without compensation in municipalities that it could govern following the local government elections come August 3.

He said that landlessness was a big reason why the country’s majority black population still lived in abject poverty and said that the EFF would do anything in its “power” to abolish this.

“That the descendants of colonial murderers, barterers, and robbers continue to occupy, use and benefit from illegally and illegitimately acquired land is not in dispute amongst sensible and rational South Africans.

“What is in dispute is the manner in which this illegally and illegitimately acquired land should be transferred to the ownership and for the benefit of the people as a whole,” he wrote in his party newsletter.

Again, it is the issue. But does this not reduce the economic sphere and limit it to just one aspect? Someone today asked me a very simple question but which I failed to answer. He asked, “How do you know when a politician is lying?”

The answer he told me was very puzzling but somewhat true. The answer was, “When he moves his lips.” Could Malema’s be the case considering that the country’s national elections are on August 3? Time has to tell.

Are Zimbabweans wealthier than South Africans? I think there is more to what measures wealth and richness than just owning title deeds of a piece of land. Also, he definitely must be less informed about operations like Murambatsvina that still cause nightmare to residences in parts of Mashonaland Province.