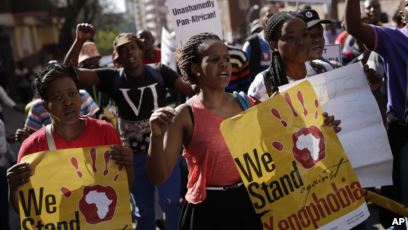 Johannesburg, South Africa. South Africa’s Pretoria has since been a no go area for Zimbabweans traveling or staying in the country’s city following a violent rampage that has swept across the country incited by the upcoming local government elections in August this year. You may have heard the rumours that Zimbabweans are unsafe in South Africa. This is whats going on.

An Eagle Liner bus that was carrying 21 Zimbabweans heading to Johannesburg was not spared as passengers were stripped of all their belongings when their coach was blocked and looted before being burnt to the skull by the angry protesters just outside Pretoria on Tuesday.

Angry protesters blocked all roads leading to the CBD with burning tires, rubbish and stones before turning to burn buses in a protest that is believed to be against the ANC’s decision to remove the current mayor Kgosientso Sputla Ramakgopa replacing him with a new mayoral candidate Thoko Didiza to contest the coming elections.

Twenty-three buses and several cars were reportedly burnt to shells. Haulage trucks and other vehicles which use the same route were burnt near Zebediela. Most of the violence, believed to be orchestrated by disgruntled members of the ruling African National Congress (ANC), has left the city and travellers in a state of dismay and uncertainty as to where this will lead and when it will end.

Meanwhile, Pretoria suburbs of Mamelodi, Attridgeville and Hamanskraal got their share of the fist of fury when angry protestors raided the neighbourhoods on Monday night looting from foreign-owned shops, throwing stones at passing cars and harassing civilians, journalists included. Police had to use rubber bullets to disperse numerous violent groups of protesters.

This gets you to think, How is this going to end? Is this the second phase of xenophobic attacks? Can anyone just be safe in a neighbouring country just like the next-door house? If South Africans can do this because they do not approve an imposed Mayor, does it mean Zimbabweans are justified to do worse against the ruling government who still ‘impose’ candidates for mp or ministerial positions?